The latest photography show of my work, “LINE OF WORK,” will open at The Gallery at Berkshire Hathaway on June 1, 2019. The exhibit consists of over 40 portraits of working men and women who either live or work near my studio in Montclair, New Jersey. The show will run from June 1 to July 31, 2019.

Life looks a little different when viewed through a camera lens, and living and working as a photographer in Montclair for almost three decades has given me a unique perspective of the people that make the town what it is. The inspiration for this piece is the wonderful connections I’ve made in my time involved in the business community here in Montclair.

There is a straight line from “Line of Work” to Irving Penn’s seminal photo series, “Small Trades.” 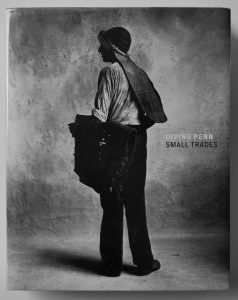 Penn captured the many different professions of Paris, London and New York in 1950-51. These were often the type of jobs that don’t usually get the glossy fashion magazine spreads that Penn usually photographed. By bringing onion sellers, chimney sweeps, and lorry cleaners into the studio, Penn was able to create “psychological portraits” of the subjects that capture the reality better than if you were to photograph them in their work environment.

I’ve tried to create my own version of this in Montclair— a documentation of the denizens of Montclair, their pride in their work, their joy, the way they view themselves (versus the way the world views them). Just like Penn, I’m doing away with the environmental factors and placing people into the decontextualized space of the photography studio, allowing us to study them without distraction, to view things in a new way. Penn said it best, “Taking people away from their natural circumstances and putting them into the studio in front of a camera did not simply isolate them, it transformed them.”

I like to think of the studio as a sort of scientific laboratory where we study the human condition. Like in a lab, I’ve stripped away variables in order to create a “case-control study.” By keeping to a repetitious set of rules, we’re able to focus in on what is most important: the humanity within each person.

-Same background, single light, shadows
-vertical and center framing
-no cropping, no retouching
-nothing runs off the edge of the frame
-photographed with the tools of their trade

In studying these portraits, it makes sense to wonder what is the nature of a job. I have found that for some it’s identity, others it’s a belief systems, still for others it’s just a paycheck. But whatever it is, we all end up inhabiting these cultural characters, whether we want to or not, based on the uniform we wear to work, or of costume we wear in life. It begs the question: are we ever NOT in character?