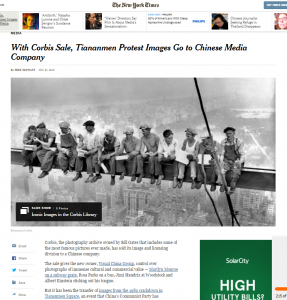 There’s an interesting article in The New York Times this week. Corbis, the stock photography agency founded by Bill Gates, has been sold to Visual China Group.

Note from Phil: A stock picture library refers to a collection of photographs or illustrations from which companies, news agencies or individuals can purchase the right, or the license, to use an image in a book, newspaper, website, brochure, or other type of digital or printed publication.

Corbis is one of the largest, if not largest, repository of images in the world. What’s notable with this sale is that Visual China Group will now control some of the most notable and iconic images. For example, the photograph of Marilyn Monroe’s windblown dress, Dorothea Lange’s portrait of a Depression-era mother, and the Zeppelin Hindenberg exploding… all part of the Corbis collection, now are owned by the Chinese company.

The controversy surrounding the sale focuses on the news photographs of upheaval in China. Visual China will now own the famous ‘Tank Man in Tienanmen Square”. The photograph of the lone man standing at attention in the Square, blocking the forward motion of a line of military tanks. The Chinese government usually suppresses discussion of the Tienanmen uprising and it is unclear what will happen to photographs that illustrate this dark chapter of Chinese history.

Some observers of Chinese media censorship are worried. As reported by the New York Times, “Xiao Qiang, the founder of China Digital Times,  said the worry was legitimate. “It should not be treated as a surprise if a Chinese media company’s decisions and actions were aligned with the policies and practices of the Chinese government,” he said.  Visual China said in an emailed statement that it was “fully committed to being a good steward of the Corbis images and will continue to make the archives available globally.””

The financial terms of the deal were not disclosed.