Ruth Gruber: a witness to history

Home » Blog » Ruth Gruber: a witness to history
Previous Next

Ruth Gruber: a witness to history

One of the first weddings I photographed was in Washington, DC. I met and photographed the families, including the, then, 80 year old mother of the groom.  Ruth Gruber died yesterday at 105 years old. She was a journalist for seven decades and her life was the stuff of books and movies. She was a witness to history. Literally.

I am reading her obituary in The New York Times today and I am amazed at her accomplishments. She seems to have been present at an inordinate number of the great historical moments of the 20th Century. She  heard Adolph Hitler give a speech, she observed the Nuremberg Trials, she reported on the founding of Israel, she wrote a book about the holocaust’s most famous refugee boat called the Exodus, she covered the Soviet gulags in Siberia and she photographed Eskimos in Alaska. 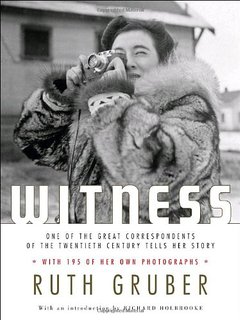 She wrote 19 books and Natasha Richardson played her in a film. Ruth was the subject of a documentary called,  Ahead of Time and she continued to write and lecture until she turned 100.   Ruth Gruber somehow knew how to be at the right place at the right time.