Is Leica out of their mind?

Home » Blog » Is Leica out of their mind?
Previous Next

Is Leica out of their mind?

I was at the recent PhotoPlus convention at the Jacob Javits Center in New York City. After spending the entire day looking at lighting equipment, photo albums, backdrops, and camera bags, I ended up at the Leica Camera booth. I was totally surprised to find my former assistant, Antonio DiBenedetto,  had just started as a rep for Leica. Leica, for those of you who are not camera aficionados, is the venerable German maker of extraordinarily fine cameras and amazing lenses.  The Leica was the classic Photojournalist’s camera from 1930 to the turn of the new century. I have a Leica CL film camera, which is one of my faves. It is small, lightweight and takes amazing photographs with lenses that are very different than Japanese lenses.

Leica still makes film cameras and has also moved into digital. The regular digital Leicas start at around $7,000 for the body alone.

Antonio took a photograph of me experimenting with the latest camera, and it is a bizarre machine. It is a special edition M60.  They are making only 600 of them, and its claim to fame is that the camera has NO screen on the back. It is being marketed to those who want to have a film-like experience, meaning, you won’t be able to look at what you just shot, just like with a film camera you couldn’t check out your image. 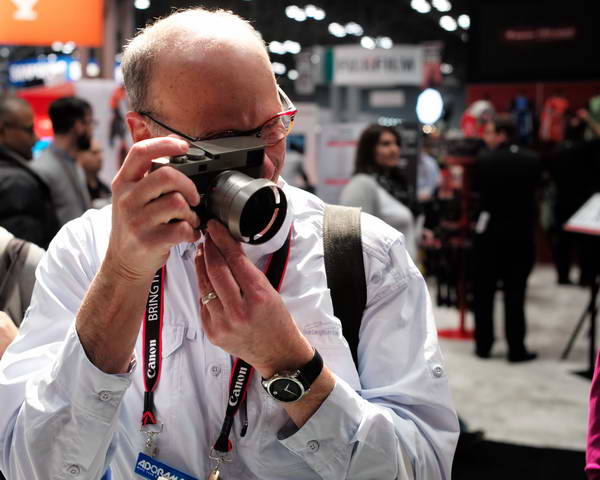