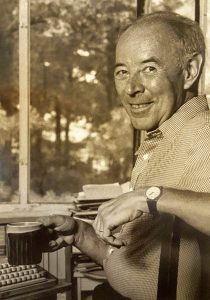 Gregory Rabassa was, probably, the foremost translator of books from Spanish and Portuguese to English. He died last week at age 94. I photographed Rabassa 31 years ago at his home for the magazine, Vista. He was an elegant, quiet man, who brought Latin American and Spanish books, some of the most important literary milestones of the 20th Century, to an English-speaking audience. His work was painstaking: how do you maintain the meaning, the cadence and the “music” of words written in Spanish, and change them into English, while still retaining all of the power, energy and importance of the original. It was an art, nearly as important as the author’s writing itself.

The obituary, written by Margalit Fox, in The New York Times is fantastic. Besides the usual who-what-where-when, it shares the difficulties and the decisions a translator must make:

With “One Hundred Years of Solitude,” for instance, the torment began with the first word of the title. In Spanish, the novel is called “Cien Años de Soledad,” with “cien” meaning “100.” But there’s the rub, for the translator into English confronts an instant quandary: whether to translate “cien” as “a hundred” or “one hundred.” Professor Rabassa was an ardent believer in the aurality of text. To him, “a” was an acoustic flyspeck, little more than a fleeting grunt. He chose the more durable “one.”